In late 1990s and early 2000s, developers as well as users  were confused about the choice of the platform  for their applications. They had to decide a solution from two choices – (1) An installable PC based software or (2) a Web application. Web applications was the unpopular choice for a few reasons – among them, Bandwidth limitations and a general insecurity about how safe using a software on internet would be.

But as the years passed by, the requirements too changed. When people started working collaboratively, (which was made much easier with the internet and with bandwidth growth) people slowly started moving into web based applications. Web based Emails are possibly the first web applications used widely. Software companies started developing cross-browser compatible web applications. Now Web 2.0 has changed the perspective of ’software’ totally. And Hybrid applications became possible with APIs etc.

Native design builds the code using the code library provided by the phone vendor.  Four primary targets are IPhone, Android, MS Windows Mobile and Blackberry. Native (installable) applications resides in your cell phone, and you  launch it directly from there, with whatever search parameters  are stored within your mobile (E.g.. The names of the 50 states in the USA, your favorite locations, daily weather, etc.). Except for free text search, all of  the search parameters can be stored in the mobile – OR they can be updated just one time.  The communication between the Data/Web server and the mobile phone could be drastically reduced. An application like a stock portfolio can be created within your Phone and stored. Every day you just need to update the stock prices. You need not download the entire portfolio each day. Also, the application resides within the phone, and can access your phone’s features such as your camera, phone book /contacts, etc. The disadvantage is obviously the development cost. No two mobile platforms can share the same mobile application, and there are too many Mobile operating systems (or platforms) existing in the market. If you develop a mobile application to market it widely, you need to develop that in J2ME (for phones that support only Java with no loaded OS), Symbian, Mac iPhone, Android, RIM, WebOS( for Palm pre), LinMo and Windows mobile.

Web based applications are built using a web toolkit.  Nothing is loaded on the device.  It uses the device browser to load and run the application.  It can be shown as an icon on the desktop that links the web server. The advantage of a mobile browser based application is the low development cost, and the disadvantage is the bandwidth limitations and the limitations of Mobile websites, which does not access your Phone’s components like your Address book, Camera, etc. Mobile Brower based applications are slow due to the bandwidth limitations and will eat up your data usage in your phone plan. Also, the user needs to remember the URLs and type it, which every cell phone user knows is just plain  hard. One advantage is that the development cost is low since the developer only needs to consider how to make it compatible with most mobile browsers, and not each type of cell phone. Also, now that many Mobile browsers support HTML and smart phones come with bigger screens to see full sized websites, and users can zoom in and out. We have keyboards too to manage this. But, if you want to browse websites, you can do that in your tiny Netbook, which you always carry with you, right?

They are Applications that use BOTH browser interfaces and native mobile components. The blended model builds a native application but uses HTML to provide some content and features. With HTML5 and JQuery, now the browsers are becoming capable of accessing a phone’s built in features like contacts, camera etc. Finally, what would be the disadvantages of  hybrid mobile applications? Two things comes to my mind…(1) Application security, and (2) the learning curve for the developers. Mobile developers need to know HTML and Web developers need to know mobile phone APIs.

Following is the chart of different mobile development approaches used in the industry. 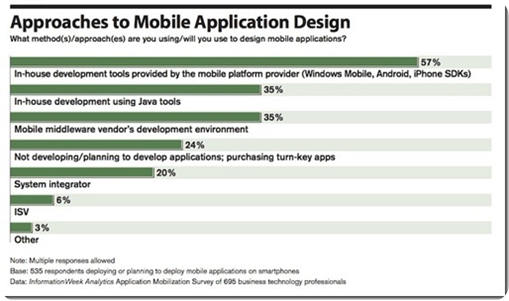 Some of the concerns for the business managers are:

The choice of platform solely depends on your goals. You need a UI that is either:

Native Application are comparatively easier to maintain, whereas application written to run across multiple platforms may have complex code thus maintenance may not be that simple and testing will have to be intense to ensure a fix for particular platform does not impact anything else.

The advantage of non-native applications is one code base. one iteration of fix will take care of multiple platforms.

The very essence of leadership is that you have to have vision. You can’t blow an uncertain trumpet. – Theodore M. Hesburgh

Search within the blog